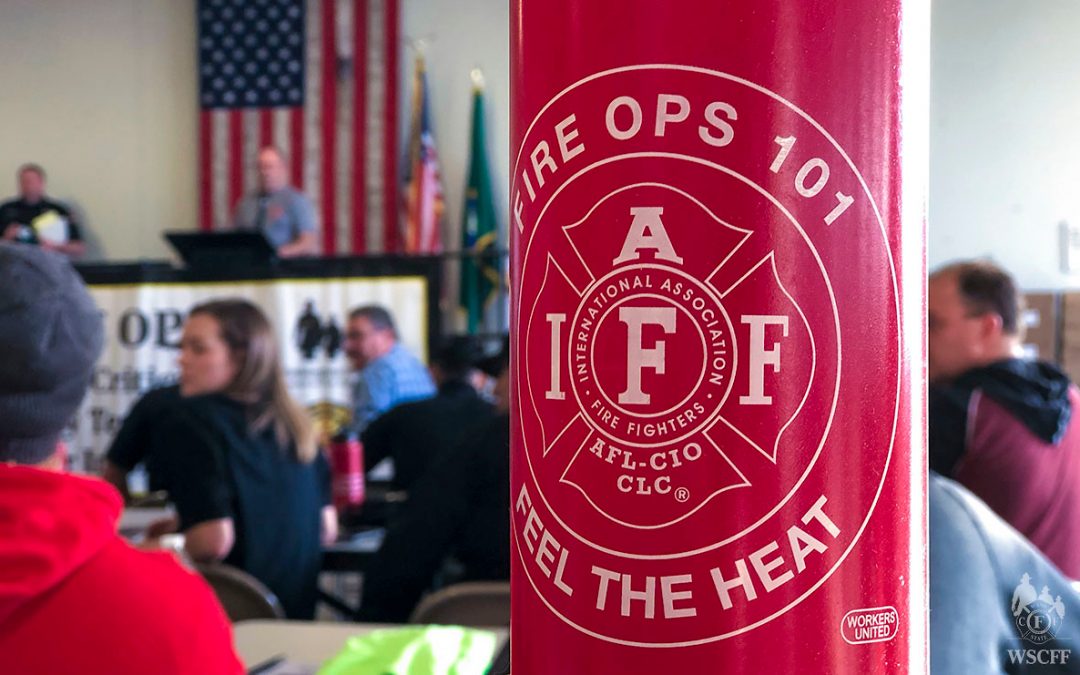 Matt is the tall, fit young man in front of me making sure my hood is on correctly, my helmet is tight, my mask is snug, my air is on and my breathing apparatus is good to go. He is talking loudly through his mask telling me, “You got this! I’m right behind you. You’re going to do great. Ready?” I have no idea what I’m in for, so I fake confidence right back and give him a thumbs up. I don’t want him to know that we haven’t even started and I’m already completely unnerved listening to myself breathe like Darth Vader. “Okay, let’s do this!” he yells. “Open the door!”

I opened the steel door to a concrete building. Inside the room is dark, smoky, loud and on fire. The next few moments are filled with commands. “Get down! Grab the hose! Stay low, stay low, stay low! Open ‘er up­!” Matt shouts. I’m now on my knees and open the valve on the firehose. “Open it all the way up, get in there! Get closer!” I’m crawling closer to the flames and we’re working together, getting the hose in position to put out a fire in a room awash in flames. The fire is slightly ahead of us moving across the ceiling, down the sides and coming up from a hole in the floor below. My adrenalin is pumping. I have only had one lesson 10 minutes earlier on how to work the two-and-a-half inch firehose. I tell myself, “Focus, settle down, this is a controlled environment.” The irrational thoughts are saying, “I don’t want to be the one who gets injured, disappoints my shadow and creates bad PR for the event!” Ok, therapy is probably needed for the last one. 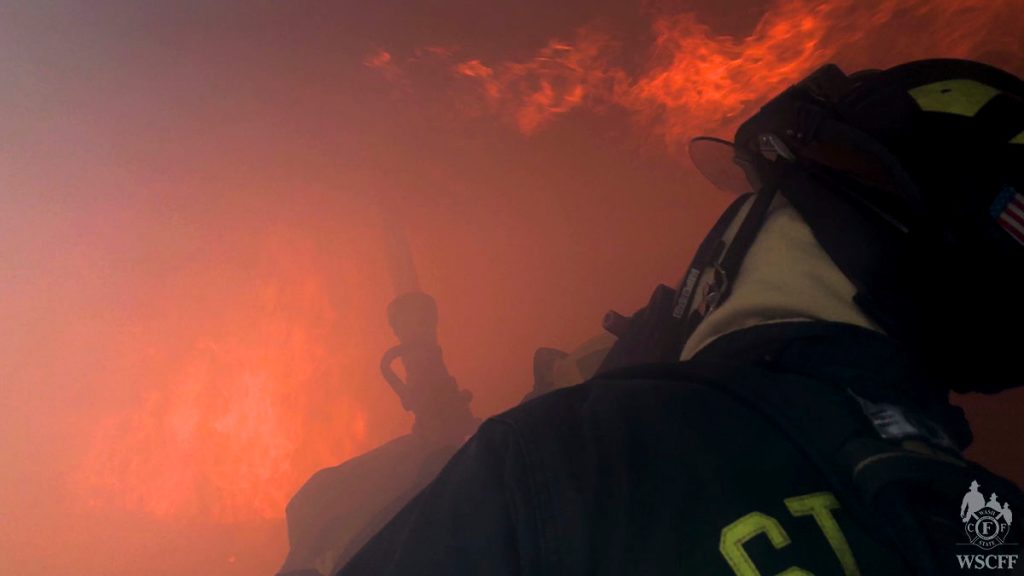 Shaking it off, I’m back trying to direct the water flow. I can feel his hand firmly on my shoulder shaking me because I’ve stayed in one position too long and the alarm is going off on my regulator to let me know I’m not moving around enough. The commands are coming quickly. “Get the ceiling! Get the ceiling! Bring it down! Make an O! Get the ceiling again!” I’m now hyper-focused, and for the first time can actually see how the water is moving across the flames and how changing the pattern on the nozzle of the flow works. The fire is going out. (Secretly, I know there’s another fire fighter in the corner controlling the station— I’m so okay with that). I hear, “Good job, good job, now let’s get upstairs. Bring the hose.”

Shifting positions, I now have to get up off the ground. I’m having trouble getting on my feet in this 25 to 30-pound suit with a 30-pound breathing apparatus on my back. It’s all I can do to right myself and not fall backwards like a water bug with its legs in the air. I’m not even carrying all the gear fire fighters usually have with them to weigh me down more! Finally, I’m on my feet, staying low and trying to crawl to the stairs to walk up to the second floor. It’s so dark. My breathing is rapid. We get to the next floor and the light from a window is coming in. I’m exhausted and sweating profusely. It’s only 9:00 am and this was just the first event of the day.

I was invited to Fire Ops 101 through my work with the staff and board of the Washington State Council of Fire Fighters (WSCFF). The event is led by Ricky Walsh, the 7th District representative for the International Association of Fire Fighters (IAFF), the union for professional firefighters across Canada and the U.S. It’s been held every year at the Hammer Training Facility in Richland, Washington, for the last 15 years. It’s a day when Union Locals can invite their elected officials, the media, mental health professionals and other influencers to spend the day as a fire fighter. It’s designed to help them understand a work environment that is full of dangers and hazards, both physical and mental. Their motto is: Time Critical. Highly Technical. Labor Intensive. You get that from the moment you step into those boots. 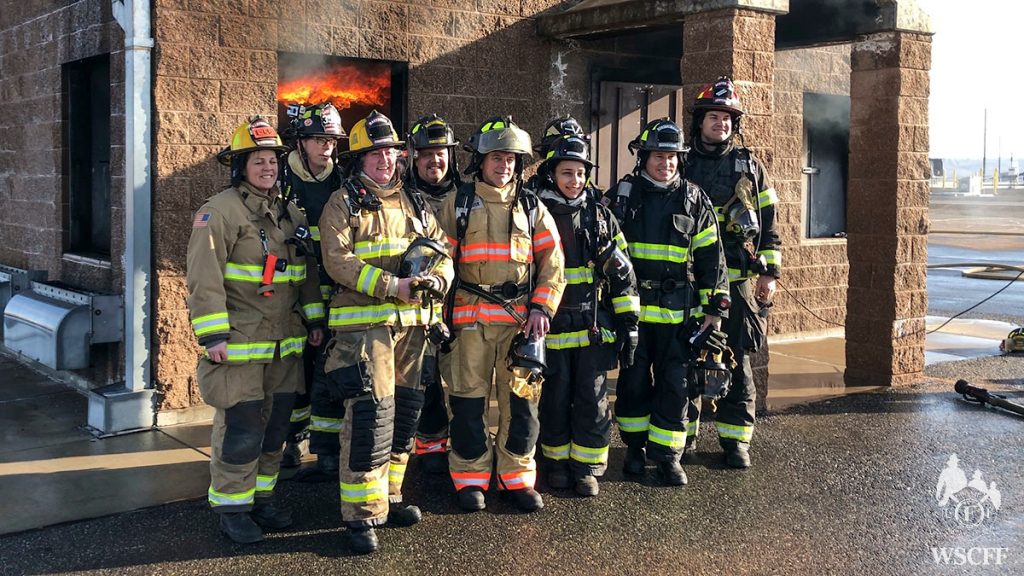 Participants and their real firefighter shadows

The participants are broken up into small teams, each with an experienced fire fighter assigned as their shadow for the day. Together, you and your shadow go through seven common tasks in the life of a fire fighter. Even though everyone is well taken care of and the fire and smoke simulations are managed, it is an intense and humbling experience. The crews make sure you’re hydrated and your blood pressure is checked after several of the more difficult tasks.

My shadow, Matt Lowery from East Pierce Firefighters IAFF Local 3520, was fantastic — articulate, funny and a natural coach and teacher. In the search-and-rescue exercise he had us crawling along the floor inside a building, feeling for the walls in a pitch-black, smoke-filled environment. Although the smoke was not real, wearing the respirator in this dark place is scary. At one point, Matt said, “Feel for the wall on your left. Keep your hand on the wall. You’re going to keep moving along the wall.” As I moved further inside, I’d feel a corner, turn and follow that wall. Then I heard him say, “Jen, turn around.” I turned around and he asked me, “Now, how are you going to find your way out?” I say, “By keeping my right hand on the wall and going back the way I came?” “Are you sure?” Now I was second guessing myself, which was exactly his point. How do you remember every twist and turn you make in the chaos of a scene, or if you had found someone, how would you orient yourself to get back out?

The goal had been to look for a survivor and I had failed miserably. I’m pretty sure one of the guys was moving the mannequin closer to me and I still couldn’t find it, even with the thermal imaging device. I was just looking in the wrong direction. It was so easy to get turned around. But then we sat for a moment calmly and Matt told me to imagine you’re crawling along, you’ve got all your gear and now you have to go over or around obstacles like furniture or anything else in the way. This is how firefighters can lose their lives, by becoming disoriented and moving into the wrong spaces. Silence…what to say? The thought hits you like a brick.

Next came the car extrication exercise. Technical experts ran us through the gear, training, expense and the super-large jaws of life and cutting tools. We learned to break glass and then each of us took a turn using the equipment to take apart the side of a car. How quickly fire fighters work to get a person out is astounding. It looks like sheer chaos from the outside, but every move, cut and break is highly controlled.

Our next stop was the MEGA CODE building where a paramedic walks us through what they see in their day-to-day job. We learned about chest compressions and some of the newer techniques they use. What’s impressed upon us is how much it costs to train — $30,000 alone for a mannequin capable of sending feedback to medical devices. After some brief hands-on training, our team took our silicon patient down a stairwell into a waiting ambulance. We piled in around the patient. The driver took off and I tried to do compressions, but it was incredibly hard to stay upright while the van was moving, especially around turns, and we were only going 20 mph. This one really got to me. I thought of my dad on several occasions and all his heart issues in the past. It became personal, fast.

The ladder climb, which I had ruminated on and heard so much about, was easier than I thought. Maybe when you start the day with fire in your face and crawling in smoke and darkness, being high up off the ground just doesn’t feel like a big deal. So, with a huge carabiner attached to a thick safety belt cinched around my waist, I climbed up on the truck. A firefighter clipped me in and I took a deep breath. Matt looked at me and said, “You’ve got this.” And for the first time that day, I knew I did, and started to plod my way up, Matt behind me. I took a couple of breaks on the way up, and he asked, “Did you ever see that movie, What’s Eating Gilbert Grape?” “Yeah,” I said. “I’m climbing up the water tower! I’m climbing up the water tower!” Two-thirds of the way up and I’m laughing really hard while trying to catch my breath. I appreciated him trying to relieve any anxiety I may have had, and the obscure film reference. 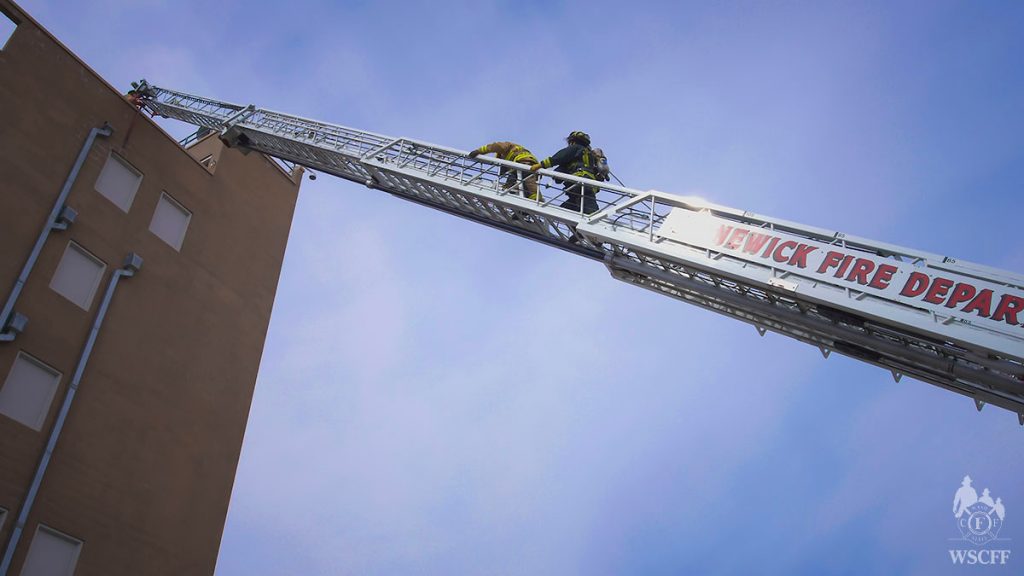 That day I walked away with a much better understanding of the clients I work with. I had interviewed many of them for Power Through Participation videos, explaining the hazards they face on the job and why political action is so important to them. This experience brought all the pieces together: the laws that save lives and protect first responders, and the money needed for equipment, training and resources.

What hit hardest were the stories. Like the frail, ill, unresponsive man in his nineties whose wife didn’t know where the DNR papers were when the paramedics arrived. By law, paramedics must start compressions, but they knew they would probably break his sternum. To me, that story wasn’t so much about the patient as it was about the things we do or don’t do as individuals that creates stress not just for our families, but for first responders as well. It gave me a whole new perspective and made me think about things I would do differently in my personal life.

Since Fire Ops, I’ve been eating better and dropped 20 pounds, not only for my health, but because someday, someone might have to get me out of a situation—a great motivator. I’ve been working on getting my paperwork in order—our list of meds, organ donation, location of wills, retirement plans and last wishes. Finally, we live in a heavily forested area, and we have dropped about 10 trees that were too close to the house, something we’d wanted to do for a long time. Between nerve-wracking windstorms and a creating a fire-safe space, we are in tinder clean-up mode as we face drier summers. It’s an experience that will stick with me for life, because I can honestly say I have been changed for good.