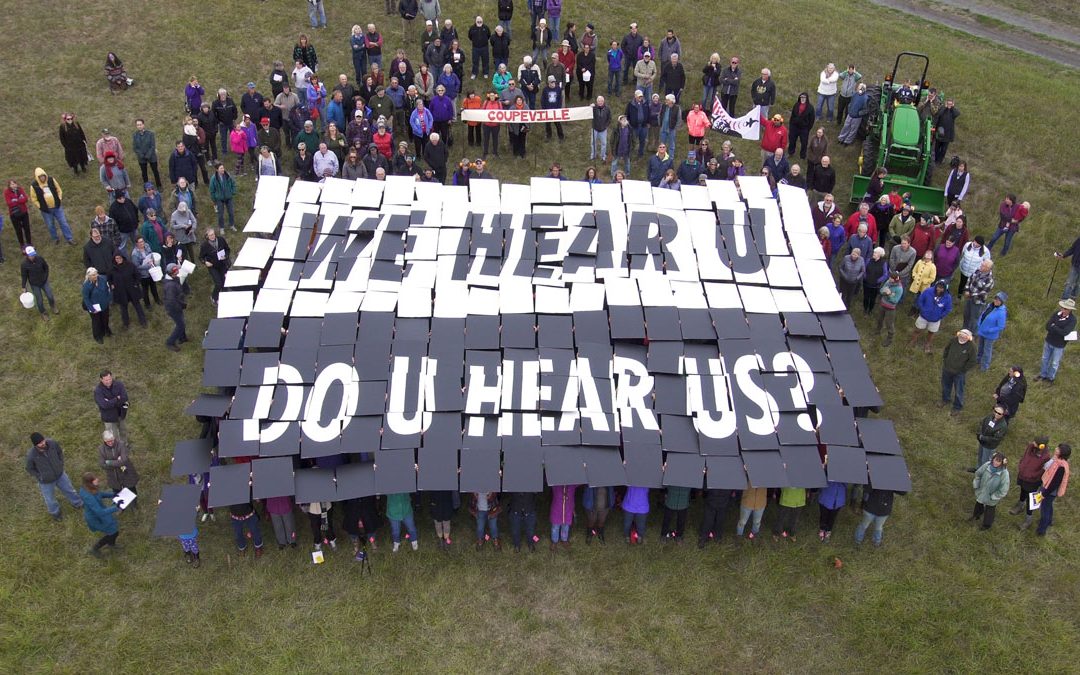 In October of 2018, my husband Bob and I had the experience of a lifetime, concepting a card stunt in the middle of a historic field that would engage and delight members of our community. It was a day of action that would send the U.S. Navy a really big message about being a better neighbor.

At a community meeting about a proposed 4-fold increase in EA-18G Growler Jet activity on Whidbey Island in Washington, we learned the Navy had plans to add 36 of these new jets to their squadron. This is an increase from 6,100 to 24,000 operations a year, threatening Ebey’s Landing National Historical Reserve and Central Whidbey’s schools, gathering centers and the county hospital. The touch-and-go landing practice strip on the outskirts of historic Coupeville simulates the landing platform on aircraft carriers. Previous “Prowler” jets were noticeably quieter, but the new Growlers are deafening. A once neighborly relationship was changing quickly and it was obvious the Navy wasn’t hearing the community.

We decided to volunteer our design, photo and video skills to the newly formed Sound Defense Alliance (SDA)—a group of about 20 Northwest organizations working together to fight the Navy’s Growler Jet expansion program. We knew there was a short window of time to raise more awareness and get our elected officials to take notice, and I had a goofy idea.

I said to my friend, Janet, who was in the thick of it all, “Wouldn’t it be cool if we could get a bunch of people in a field and have them hold cards that would say, “We hear you,” on one side and then have them flip the cards and say, “Do you hear us?” They’d be pointing them up to the sky as if to send a message seen from overhead. Maybe everyone could wear ear protectors? We could film it from above, produce a quick video and send it out through social media.” Honestly, I didn’t think anything would ever come of it.

Then, Janet relayed my concept at a group meeting. They wanted to do it. We had three weeks to make it happen. EventBrite invites were sent out to the public to both attend the event and sign up for a card stunt.

Bob researched card stunts, including the very first stunt performed between the University of California Berkley and Stanford University (btw, very interesting). We wanted to understand shape and size of cards, color, how people stood next to each other, flipped cards and received commands.

At the next group meeting, Bob and I brought our research, along with a crude card animation mockup on a laptop. The group figured out what would be needed in materials, logistics, a boom lift and volunteers to pull it all off. The event would be called SOUND OFF – A Community Rally.

A different kind of card sorting

The first design was based on small 18″x24″ cards. We tested the idea with heavy-duty poster boards cut to size. We quickly realized it was too small a space and the poster board was floppy. If it rained — a very real possibility in the Pacific Northwest — they would be ruined. Scratch that.

Next, we cut some corrugated boxes apart and made a larger shape. It worked! I sourced 24” wide x 36” high pieces that could be delivered within a couple of days. It meant painting both sides either white or black and a design iteration for the new dimensions. I knew I would have to set some breakpoints in the design too.

The group’s organizers were confident a lot of people would show up. But no one really knew. What if they didn’t? I started with a bare minimum design approach with the most important information in a small view. The large core message would be three panels high (12′) on the top in large black letters painted on white boards that said, “WE HEAR U.” Underneath, would be a graphic of a chart that went up to 119.8 decibels illustrated on black boards.

If we got 32 more people, I would add two rows of cards in between the two phrases to make the sign stand out better. (Think tablet version).

Again, with another 32 more people, I would fill in the top and bottom of the message with blank cards to create blank margin space. (Think laptop breakpoints).

Add 20 more people to the above and I could extend blank cards out to the sides. (Think extra-large monitors).

This was the optimal goal and how the message would look best in the aspect ratio of the video frame. 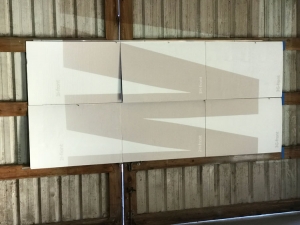 The art team borrowed a projector from the local high school. The art crew would need to know the grid order of each card and to note the top. I designed that directly into the file so when projected, volunteers could pencil in info on each card.

Janet and I lined up the grid projection at the right scale on top of nine cards on her studio door for efficient production. They could now trace the parts of each letter and mark whether it was to be painted in black or white. Janet led the art team volunteers and did an incredible job.

A few days later, Bob and I went to Janet’s studio to see the progress. Cards were painted and drying everywhere. It was coming to life. I had Janet stand next me and Bob recorded us holding the cards from a starting position to placing them over our heads to flipping the cards. In the clip, I’m laughing because I’m 5’10” and Janet is around 5’2.” Holding the cards above our heads showed a huge height disparity that was going to be a problem in the field. But even better, we tried to flip with the command “flip left.” Well, one of us didn’t get that right. Awesome fail.

How we solved it: We decided the instructions to participants would be, “if you’re 5’6′ and shorter move to the front bottom of the message. If you’re 5’7” and over, move to the top of the message.” If done right, this would form a slight angular rise that would work well with the camera angle from the boom lift position high above everyone. As for the words “left” and “right,” I would avoid using those.

A few days before the event, Bob worked with the logistics volunteers who marked out a perfect grid in the field. Pink flags were placed in the middle of each rectangle, and each flag contained a coordinate that would match a card.

Meanwhile, I was writing out my instructions on super large post-its in giant letters. I was really nervous. So much could go wrong. I finally got my words down to a short set of instructions. There would be three scenes total with three practice tries and three final tries. I would bring these large boards with me as visual guides for the crowd.

I knew we had at least 128 card participants. We also had Janet and the volunteers there to make sure all the cards would be handed out correctly.

The first part of the event took place in the late afternoon at historic Crockett Barn and would have community members writing postcards to representatives, senators and our governor. Over 3,000 postcards were handed out and people wrote their messages on the spot. The crowd was growing. Turnout was great.

After the postcard-writing session, about 300 people came walking down the hill towards us. It was both awesome and terrifying. I was given a headset microphone and stood on a large boulder trying to explain the concept and what was going to happen. I told them of how a giant growler puppet would move through the crowd dividing the message as if they were dividing the community. A collective, “Ahhhhhhhhh” indicated people understood. That was a cool moment. Participants were stoked. This was going to be fun. But we had 30 minutes to make it happen and we were losing light.

We began by separating people by height. We made sure participants knew which row they were in and had them raise their hands and sound off their lane number. Without even handling a card, I had them raise their right arm in a power to the people pose. I began, “The instruction to flip will mean raising that arm up higher first. I will say, white cards flip or black cards flip.” It worked. We then handed out the cards. 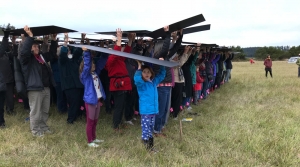 The front line of the card stunt holders with the tiniest of participants. Photo by Marilyn Sherman Clay.

More people joined us and by the time we were done, all 170 card spots were filled. The rest of the community surrounded our card holders.

I was on a ladder, but once the cards were raised I realized I couldn’t see the entire field of cards. The angle was too slight. Working through my panic, I yelled up to Bob in the boom lift above me for feedback. He was able to yell down to the crowd with some instructions.

We did three test movements and each one got better. After the third dry run, the entire group sang, “America the Beautiful.” It was truly moving. It also gave everyone a chance to relax their arms. After the song, we were ready to film it. Dry run take 4…almost. Take 5, almost perfect—I made the unfortunate mistake of complimenting the group by yelling, “You rock!” Which came back at me in full choral force. While it was hilarious, take 6, had to be it…and it was. Everything went perfectly. Bob captured everything.

In UX design it’s drilled into us to create delightful online experiences for our users. On this day, all my years of art, theater and design experience got put to use. We heard from attendees how much they enjoyed being a part of something as a community, and left with a little bit of hope that their voices would be heard.

As of this writing, there is still no resolution of this issue as the Navy has already increased jet practice over this region of the Pacific Northwest. But we have had an impact, and the movement presses on.